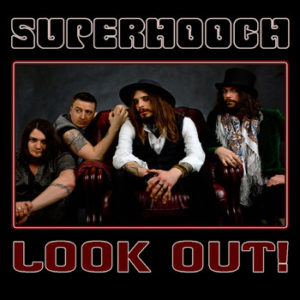 Coventry’s Superhooch describe themselves as ‘Hyperactive, Groovy, Swirly, Stoner, Garage Rock psychedelia from the heart of the U.K!’ and have recently released their new album Look Out on Mains Spike Music. Fighting Boredom have been giving it a listen, see what we thought below.

Then someone sends you an album like ‘Look Out!’. This last month or so I’ve heard more new music than I can list and there have been some absolute belters in there. Some I’ve written some words about, some not. But to be very clear, I don’t agree with any of the sentiments I pass on above. There is always music to be found and if you’re very lucky sometimes it comes to you.

Superhooch are from Coventry, and they play guitars, lots of guitars, huge jet propelled high octane guitars some of the time, massive prog infected spiraling into the outer universe guitars when they feel like it, crunchy, quirky and massively catchy guitars as well. In fact, their guitars catch you off guard as much as the rest of the album. I’m not detracting from the rest of the bands instruments either, the chaps on bass and drums, not always lumped together but here it’s the case, are so tight and so hard that you could drop a penny on them and it would ricochet off and hit you in the eye.

You kind of get lulled into a false sense of recognition with this record, it starts off with the massive alternative rock of ‘Look at the Rain’ and you’re off. You may think that the vocal is kind of growly and odd, but because it fits so you relax into it. Then Sweet River Blues seems written around the voice, with a huge rock, blues workout to finish. But at that point the album flips into unknown territory. Sir Dickie has a quirky, music hall vocal delivery and cautionary tale, there are still crunchy hard guitars but essentially this is as if a pantomime has crash landed into a serious dramatic performance in the theatre, and yes, it’s a good as that sounds. From there we go through drug addled bliss, nasty menacing threatening music and a prog masterwork to finish.

Superhooch have given us an album to discover in one sitting and then try and decipher what your brain is telling you afterwards. A record to blow you away and then rearrange what’s left into funny squiggly patterns. Superhooch, ‘Look Out!’ is a record to get hold of.

You can buy the CD of the album on Superhooch’s Big Cartel page.