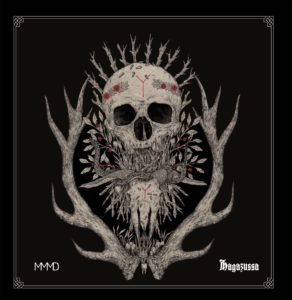 MMMD, formerly Mohammad, release their original soundtrack for Lukas Feigelfeld’s slow-burning gothic horror movie “Hagazussa – A heathen’s curse”.’The music is absorbing, emotional and powerful as ever.’ Fighting Boredom have been listening while glancing over our shoulders.

I’ve been sat alone in an old warehouse setting up stuff for the last few hours and I have had this playing as I did. I’ve already listened to it while driving or sitting drinking coffee, but the experience is somewhat different when I’m alone surrounded by discarded industrial equipment and bare brick walls with the rain falling on the decaying glass roof high above me. It’s not conducive to pleasant positive thoughts, on the contrary, I’ve not glanced over my shoulder quite so much whilst working for a long time.

MMMD use low frequencies, and I mean low. When we saw them at Supersonic Festival a year or so ago they had an electric double bass and a bass guitar. Which from the sound of this music is what they have still. The notes are drawn out for ever and bent as they are played. There’s an underlying low frequency of static and drone that just adds to the disturbing nature of the music. My point about MMMD is that they are creepy and unsettling enough without putting them onto a horror film. I haven’t seen the movie but I have no doubt that with this sonic nightmare underneath it, it’s bloody terrifying.

The record is a whole piece of music and deserves to be listened to as such. I recommend you do that either in bright sunshine or at night, with the doors and windows locked and all the lights on. It will bring to you decaying ruins, lost souls and dank moorland with twisted broken trees. It’s a wonderful record but it won’t give you pleasant dreams.