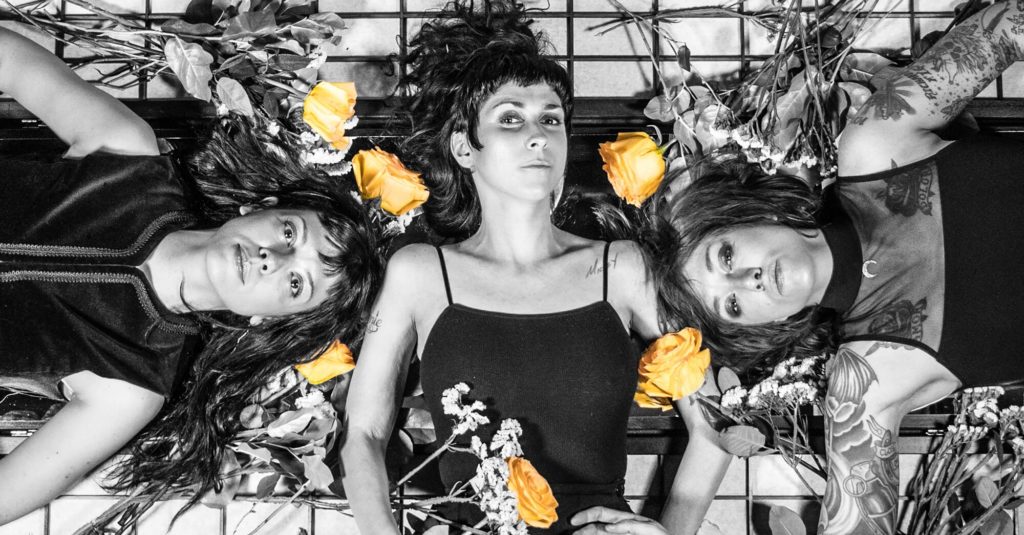 Atlanta’s best snotty punks The Coathangers have given us the second song to come from next month’s new album ‘Better The Devil You Know’ It’s a departure for them as it’s a full on political attack on the NRA, it calls bullshit on US gun laws. It’s accompanied with an explanation essay by the band as they know the trolls will be in full force about this one.

The track is pure Coathangers. Fuzzy guitars and bass and a driving rock’n’roll drum beat that it all keeps moving to. Oh and a chorus to shout along to as loudly as you can.

Here’s the explanation and the lyrics for the track

My name is Julia and I play in The Coathangers. On our new record, The Devil You Know, we have a song called “F the NRA.” It is a protest song. As a band we have always believed that the personal is political, that individual action is the way towards political change. Letting our actions and accomplishments speak for themselves without making specific political statements, we have let this mentality guide us. But as this new song willfully provokes the beast, the band has decided to address the potentially controversial subject matter directly in an open statement.

“F the NRA” was written out of anger with the escalating and persistent gun violence we saw last year, and frustration with the current stranglehold that the National Rifle Association (NRA) and similar groups have on our political system. To be clear, we are not endorsing any political party’s agenda. We are not against guns or gun ownership, however we strongly believe that this country is in need of gun control regulation including stricter waiting periods, expanded background checks, and more stringent laws for purchasing ammunition. Statistics overwhelmingly indicate that countries with stricter gun laws see proportionally fewer gun deaths. Given the obscene amount of gun violence we saw last year alone, the lack of comprehensive changes in gun regulation is disturbing.

Formidable obstacles on the road to reasonable gun control are lobby groups like the NRA. The NRA represents the special interests of gun and ammunition manufacturers along with its almost 5 million members. Those interests use the Second Amendment as an excuse to uphold the gun industry in its current form at all costs. To do so, the NRA is able to use monetary contributions to gain political favor, while making any footholds in gun regulation seem like strides towards disarmament of all U.S. citizens. In addition, the NRA creates content through its media outlets that promotes fear and division. Acting as a PR firm for the gun industry, the NRA pays for and runs commercials that tell us that nobody can keep us safe and encourages everyone to live defensively. It follows that in their mad frenzy to protect the Second Amendment, the NRA is infringing on our First Amendment rights to speak freely and protest; an appalling example being the fraudulent media attacks used to discredit Parkland School student activists. The power of the NRA lies not only in its ability to impart its agenda in high profile discussions around gun laws, but also in the way it makes people that disagree with its agenda seem unpatriotic and un-American. The patriotism argument has polarized the whole of America and made candid and unbiased discussions on gun laws almost impossible. The result is an atmosphere of fear and self-censorship that is distinctly and undeniably in conflict with the rights and freedoms afforded to us by the Constitution.

The words to this song come from anger. And it is because I love this country that I was angry when I penned it. I am a refugee and an immigrant. Freedom of speech is slight in my home country and people risk arrest or worse if they criticize or protest the government. I love the United States and I am proud to be an American. In many ways I embody the “American Dream.” I do not take the freedom of expression that all U.S. citizens are granted lightly. The band was confident that we wanted to put “F the NRA” on the record. It provided a personal catharsis and a sense of empowerment in the wake of the immense feeling of helplessness that was weighing heavily on us as we coped with continuous reports of mass shootings. It was not until those around us started warning us of the repercussions we could face, did we realize the risk involved in yelling at the giant. My ingrained fear of speaking out came back to me. Yet the reason I am a musician is because of a need to express my truth, personal or political. I began to question everything: the rights of an artist, the responsibility of being political, the fear of backlash, and the desire to be heard.

To gain perspective, I reached out to some personal heroes for advice: Dennis Lyxzen, Brendan Canty, and Kathleen Hanna. I like to think we are part of the same community, with a punk ethos of pushing boundaries and taking risks. I asked them questions about the responsibility an artist has to explain their art—particularly when it is political—and their own experiences with backlash. I was seeking insight into the best way to handle the potential controversy that could follow the song’s release.

As I expected, given his fervent nightly denouncement of the Trump candidacy during our tour with Refused, Dennis Lyxzen was passionately excited at the notion of infusing art with a bit of controversy. “Politics is important to the fabric of punk,” he said. “The point is to cause a reaction!” Dennis was adamant that we need to stand for our ideas and that not everyone needs to agree, though he did encourage me to learn some statistics in support of gun control in case I was put on the spot. (He went on to say that since he lives in Sweden, it’s hard for him to gauge the power of the NRA or the risk of engaging with such a powerful lobby group.) We discussed whether he was ever fearful of provoking and he responded with a firm “no,” but that an artist needs to read the situation when challenging an audience. Dennis is one of the most politically outspoken, hopeful people I have met and I was left with a rather empowering feeling after our conversation.

The reply was much more cautious from Kathleen Hanna. “Yes we should all speak out … but your health and safety and well being are so important.” Spoken like someone who has experienced backlash, she continued, “you will get trolls and haters and if that’s not something you have a support system to help you deal with, you should wait till you are strong enough.” We did not have a chance to have a thorough chat about all the angles of the issues, but the sincerity with which she expressed her concern for my mental health was a sobering dose of reality. There was a price to pay for being outspoken, and it was potentially detrimental. Certainly a woman in Kathleen’s public position has received plenty of cyber harassment. The Coathangers have been the victims of trolling too, with trolls leaving comments like, “Your mothers should have aborted you,” and that we “are the reason women should not be allowed to vote.” We learned to cope with anonymous commenters and bullies years ago, and although I took her concern to heart, the shit-head punk kid inside me was not ready to back down.

When I spoke with Brendan Canty, we delved deeper into the psychological terrorism that the NRA presents to all of us. As a father of four, mostly what Brendan was upset with was the “psychic damage” all of this was having on the children of America. Kids in schools across the country are watching and they are afraid. Many children are subject to daily metal detector screenings, adding to the feeling of vulnerability, the same vulnerability the NRA is using to promote guns. I asked Brendan if, during his time with Fugazi, he ever felt afraid to be political. “It’s a different reality now,” he said, citing a time Fugazi played in front of the White House in protest. “Back then, you might get on the local news; now you can reach 300k people instantly.” However it’s not that simple, and we agreed that being vocal was more dangerous now. The internet bullies, trolls, and bots have contributed to an atmosphere of fear and self-censorship but we must not let them intimidate us into silence. Throughout history, this kind of oppression has only led to degradation of human rights. If we want to be a part of the solution, perhaps we must be loud! Brendan closed our conversation with his punk sentiment shining through, “I don’t think you need to paint a picture beyond your lyrics—the song is the statement!”

So I leave you with the lyrics to “F the NRA.” They will speak for themselves. People are dying needlessly and the population is being consumed by fear. Fuck that! We can do better.