Half of Fighting Boredom headed for the Arches Venue last Wednesday for what promised to be a night of metal, psychedelia and general mayhem judging from the band’s names. Read what we thought below.

So tonight has perhaps the most lunatic bunch of band names I’ve seen sharing a bill for many a year, possibly the last merging of titles like this contained the mighty Ozric Tentacles but then that would have been a while back now. I’ve come without the trusty Fighting Boredom photographer so I feel only half here, it’s strange. The word is that Charles Dexter Ward’s guitarist is stuck by Luton on the M1. Anyone who has read anything I have written about Mr Ward and his Imagineers will know my feelings about them and I’m fairly sure that being in a van on the M1 was just a cover story for glitches in the band’s time machine. He may well be stuck by Luton but I doubt the M1 has even been built yet, or humanity as we know it exists, he’s in the primordial forests hunting for the origin of the psychedelic gods.

The room is busy and that’s good to see especially for a Wednesday night. As Charles Dexter Ward’s man is stuck in the Triassic getting closer Trevor’s Head take the stage instead.
They chug out riffs to drown out the music coming from the PA, smile and say Hello. Then they kick straight into fast straight ahead rock. The high melodic vocal is all but drowned out as the music switches tempo and jumps around. There’s a real NWOBHM feel to the songs, which is never a bad thing. As it progresses you realise that there is about an album worth of ideas in the first song with the way it switches around and moves. 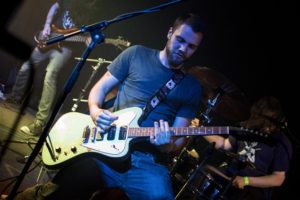 There’s dry ice and the place is full of riffs, the night is turning out to be very metal. They then batter us down with hard, heavy thrash and a screaming vocal, switch to a drum led boogie rock that has an epic feel. Every song is an adventure into different strands of rock and metal, with a bit of funk and fuzziness thrown in just for a laugh. They are tight and great. I’ll be seeing them again.
Charles Dexter Ward’s man is now heading through the Victorian age, heading for home as the time machine hasn’t over heated again so Chubby Thunderous Bad Kush Masters appear and the talk outside is that they are unmissable. Thirty seconds in and they prove this. They are dressed as outcasts from some sort of Sixties Filmore East insane asylum. Resplendent in tie die and headbands. 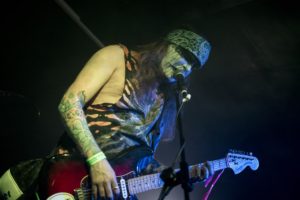 But they also have Corpse Paint, and the music reflects this dual personality with a schizophrenic mix of mentally heavy psych rock and incredibly intense metal that appears to jump off the stage and punch you repeatedly in the side of the head until you agree to like it. What becomes clear is that with this band there is no quarter given, their spaced out onslaught just keeps upping the stakes until the people at the front are frantically headbanging along.  Mayhem and instability have taken over the night. The vocals are low and hateful, a perfect match with their deathly black metal psychedelic freakout. They finish with a full on thrash attack and they leave at least some of us shell shocked.
The time machine has landed and all of Charles Dexter Ward and the Imagineers have disappeared off to some far distant time to inhale inspiration from a prehistoric volcano, before they take the stage. Fighting Boredom watched these a week and a half ago so we are expecting much the same, but you never know, they could have travelled centuries since then. I’m already disorientated from the onslaught of Chubby Thunderous but from the moment they hit their groove Charles Dexter Ward and the Imagineers have me. Their Whiskey fuelled bloody knuckle boogie is to die for. The vocal seems even more off the wall than last time, the band so tight it hurts, 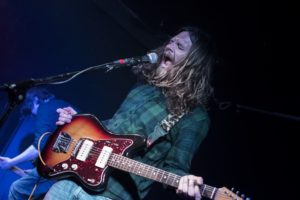 they lock together and you know there is nothing stopping this sound. The music is taking hold now, reality is sliding apart as the singer sways and stretches while the band play on. They speed up and the walls are closing in, they loosen off and crash into an almost traditional blues mood but it still sounds like a voodoo ritual. The sound distorts and fuzzes more as shadowy figures, in cloudy cheap suits with strange, unearthy instruments seem to stand behind them playing.
The crowd are dancing, smiling and in some cases just standing open mouthed watching the band rip into even huger psych riffs and beats.
This is music to summon the old ones with, you think the Lovecraftian name is an accident?? They are the bar band in the last watering hole before the descent into the void, where they have stolen the blood and fury of demons. Where angels shoot speed at the bar while the damned slamdance on broken glass. It’s that big and that twisted. He’s screaming ‘Time Travel!’ at the top of his voice, they play one more boogie drenched blues bastard of a tune and then in a burst of feedback they are gone, back into the spiralling vortex of the ages.
Lacertilia come next, their singer in green glittery face paint, serial killer gloves and a poncho which gives him just enough glamour to hold your eye as he commands the stage like a pro. 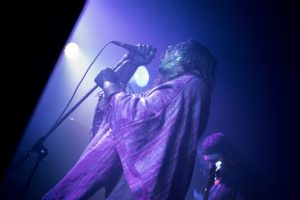 The sound is a funky, loose metal which moves up and down, hard and cool. His gruff melodic vocal slots perfectly into the noise made by the rest of the band, content to stand and create the backing for their focal point of a vocalist. They are great too, it’s good that in a tiny club like this you can get four bands that, although loosely in the same game, all sound as good and different as they do, draw a decent crowd and are able to slot around what may have been a disaster with one of them having a minor crisis, good to see that small bands just want to play and will help each other out.
I digress, Lacertilia have a massive, atmospheric feel, they echo the sensibilities of bands like Faith no More and Iron Maiden but then move away from that to give it a doomy stoner edge as the guitars and bass mash together and intertwine again. It crashes back into galloping thrash and you realise that these guys can play what they want and they will pull it off, another great band. What a night.
I have to leave before the end of their set but I will make an effort to catch them again. In fact all of the bands tonight are well worth your energy to check out, an excellent evening and my ears are still buzzing.
–
Lasertilia are on Facebook and also Bandcamp.
Charles Dexter Ward and the Imagineers are on Facebook and you can download their first album from Bandcamp.
Chubby Thunderous Bad Kush Masters are on Facebook and have a Bandcamp page.
Trevor’s Head are also on Facebook and also have a Bandcamp page.
All words by Adrian Bloxham, all pictures from Pulse Media Photography.