Deliaphonic presented by The Tin Music and Arts and Synthcurious

Delia Derbyshire was a musician and composer born in Coventry in 1937 and is rightly considered one of the pioneers of electronic music. The 5th of May 2017 would have been her Eightieth birthday and so in one of Coventry’s most striking buildings we are celebrating her life and work. Former collaborators, fans and modern day electronic musicians are all playing tonight acknowledging her influence on their work. Fighting Boredom are here, read what we thought below.

We stand queuing, I remember visiting this place when I was a kid, how huge it looked and how old the ruins were next to the new Cathedral, an architectural triumph of it’s day. We stand under the massive canopy in the natural wind tunnel that it forms and look at the sheets of glass engraved with angels that don’t look very angelic at all. They look frankly terrifying. 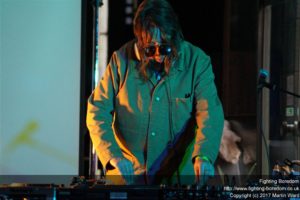 We get in as Jerry Dammers plays records, he is billed as a DJ but he stops before every record to tell us just what he’s about to play and what it means to him and how it relates to the evenings star. Because that’s what Delia Derbyshire is, she’s a star to these people. An originator of electronic music and an innovative force in it’s development. As we walk in he is playing the theme for Doctor Who which as Delia’s best known song I would bet is recognisable to more people than any pop or rock song ever. If you were a child in the sixties, seventies, eighties or noughties you will know that tune and it sounds as eerie and disturbing as it did when you hid behind the sofa.

He introduces Jonny Trunk who talks about the ‘Circle of Light’ film about to be shown. From 1972 it features the photography of Pamela Bone with a  soundtrack by Delia Derbyshire and Elisa Stansfield. He explained that Pamela didn’t think that printing her pictures showed them at their best so she used glass slides, the film shows these and the soundtrack is a collaboration between the electonic music of Delia and the field sound recordings of Elisa. The film is visually striking, the pictures are beautiful, the soundtrack is washes of low electronic noise like a cold wind blowing over a static sea. I look around and realise just how magnificent the building is, the rebuilt Cathedral is being brought to life by the massive rushes of sound and I have to stand for a moment.

Birdsong fills the air as the film continues then disappears again into the noise. An owl hoots suddenly and half the audience jump, I am again standing next to the angels carved into the windows but this time I am listening to otherworldly music. The sound is timeless, it is anchored to nowhere and no space yet it echoes everywhere, that’s why Delia Derbyshire is so special.
Jerry Dammers takes over again and plays Happy Birthday for Delia’s eightieth birthday. Then continues with another dose of off the wall electronics and music.
Howlround start to play and it the dissonant and elongated music 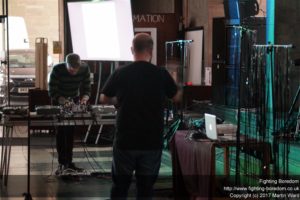 is reminiscent of a slow train pulling to a halt. They are using lengths of tape and looping them around poles to create loops and stretch the sound apart, they appear to be mixing in tape, they have hooks with lengths on and they are carrying pieces around, threading them through the recorder and mixing the sounds into the music. There are strands of tape around shoulders and spinning across the space between the reels and the pole, I have never seen this done before and the mere sight of it is making the hair on the back of my neck stand up, this is how some of the classic albums I love were made. It’s brilliant, a shuddering and huge sound. 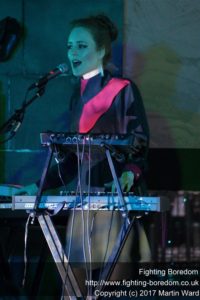 Hannah Peel is different again, she begins with the delicate sounds of a carousel which falls into dark tones bringing up feelings of fear and innocence lost, it’s like music for a twisted and skewed playground, and it is really good.
She dances snakelike and cool and sings with a clear high vocal that matches the music. it’s almost pop but just a tad too disturbing and a pinch too real. She seems a diminutive silhouetted figure in front of the projected background but her voice fills the building. The electronic washes make the ideal background for her vocal. The music grows around her singing with a low bassline and high pitched tones competing for your attention. She goes into a full on eighties Giorgio Moroder groove and does it extremely well; this again switches to xylophone tings and a strange emotive vocal that sounds childish but proves highly emotive and very beautiful.
In between the sets Jerry Dammers is playing records and introducing them as he goes, he plays the music from the Denim advert from the seventies, I remember the advert but this version of the song blows me away.
The next guest is Dr Peter Zinovieff who introduces his performance 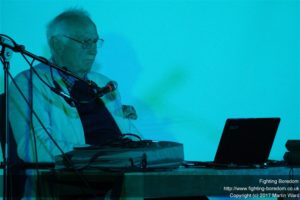 pieces and then lets them play for us. There are two, the first is ‘Jolly for Delia’ a result of him having worked with Delia, it consists of layers of sound, very sixties sounding chimes with insanely disturbing sudden bursts of hard static, turning into a Calliope Carousel for the damned, music from a carnival that you know has something very disturbing behind the painted facades. It twists and turns into a nightmare of psychotic music that feels like the fairground is melting and tripping around you, the sanity at the start of the piece is driven back by the utter madness of the finale.
The second piece is a collaboration with Beethoven ‘Good Morning Ludwig’ derives from a ‘lengthy morning discussion with Beethoven’ where he got permission to make variations on his Coriolanus overture’. The piece is tinged its classical origins with an electronic strangeness hovering around its edges. Another piece of music tonight that proves to be strangely emotive. 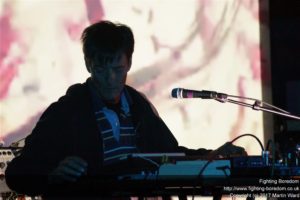 Pete Kember AKA Sonic Boom uses tweeting synths and humming bass to carry me away again into the music as the sound grows. It slowly comes up mesmerising you into its embrace. The layers are pure Spacemen but the groove is reminiscent of the great Tangerine Dream. The bass sound rumbles deep down and waves of electronica break over the top. There’s a huge throbbing like a huge spaced out helicopter hovering and then the gentle small sound of a fairground echoes around you once more. A fitting tribute to Delia and Pete would know as he worked with her later in her life.
We leave with the strange music still deeply embedded into our heads. It’s been an emotional and quite beautiful night, both the setting and the music have provided a fitting tribute to one of our cities musical pioneers and also I feel, one of the least known. If only she had still been here to see it the night would have been perfect. 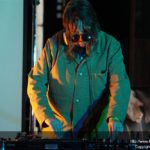 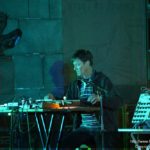 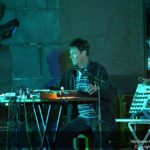 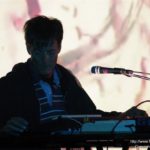 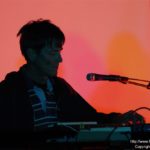 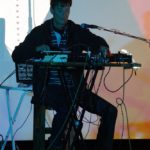 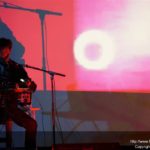 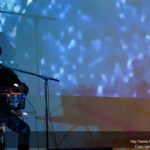 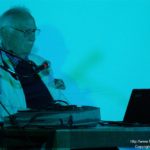 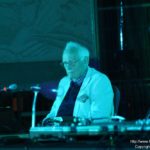 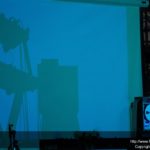 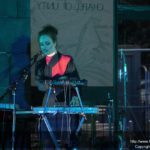 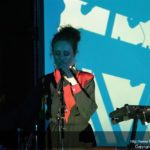 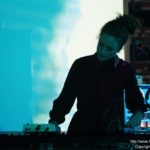 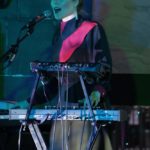 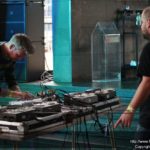 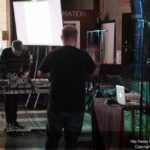 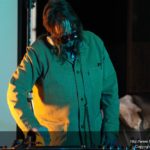