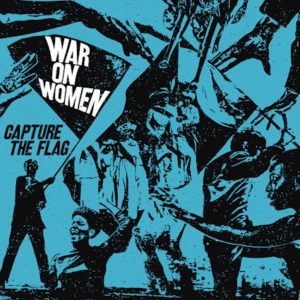 War On Women – Capture The Flag

War on Women are a ‘co-ed feminist hardcore-punk band. Formed in Baltimore, MD in 2011′, they were ‘born screaming—at the world, at the status quo, in the face of oppression.’ This is an angry, powerful and hard-core album. in it’s rage it gets you shouting along and moving as you take the politics in.

It’s a breathtaking listen. It’s for the moments when everything overwhelms you and the escape is knowing someone else cares enough and is angry enough to vocalise how they feel too. Alongside the music they are also releasing a college-level workbook to go with the record. They are the whole package, a call to action. A blast of anger and mutiny that is needed in this day and age across the globe.

There’s been a huge amount written and spoken about how fertile the U.S. hardcore and punk movement became in the face of Reaganism. A senile cowboy actor in charge of the most powerful country in the world in the middle of the Cold War. We knew the world was going to end and the music reflected the powerlessness and anger we all felt. It made us feel better that there was someone else there who felt the same. Fast forward thirty or so years and there’s an orange clown in the Whitehouse, women rights, LGBT rights, immigrants rights and everyone else’s rights that don’t agree with the President’s are being stamped on. It makes me feel sad, angry and at the end of my tether that records like this still need to be made. But while they do, we need music like this.

War On Women are fucking furious, they are livid. Whether they show it in a white hot hard core blast or a measured slow burning fuse they are apoplectic with rage. This music is bright, sharp and concise. There’s no excess, no flab, no filler if you like, every song has a message and a reason for existing. This is razor sharp, concrete hard and is beautifully full of rage. It’s punk as hell. The song titles give you an idea of where they are coming from. ‘Childbirth’, ‘The Violence of Bureaucracy’, ‘Dick Pics’. They’ve had enough and think that you should have too. This goes right back to Black Flag, Minor Threat and then straight into Riot Grrrl, proved by the fantastic Kathleen Hanna providing vocals on YDTMHTL. Joanna Angel also sings on the album as does Lauren Kashan and Eva Beer-Harlan. That there are four more reasons to buy this.

They have the punk idea that you get the music right and then the lyrics will propagate the message. The perfect hard core of ‘Anarcha’ with it’s clear, razor sharp music and message stands next to the post hardcore burning ‘Divisive Shit’ that is as strong for it’s restraint. It’s a blast and it makes you think. I really, really hope that War On Women get to the UK soon. I feel that this would be even harder live. Seriously, remember hard-core, remember that feeling you got from belonging and knowing that you were on the right side? If you do, you need to hear this record.
–