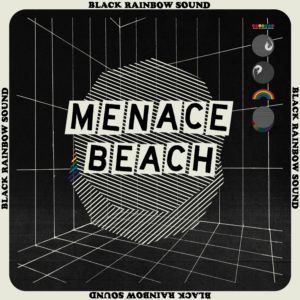 Leeds-based Menace Beach have just released their new album, they describe it as ‘a colourful world of bizzaro no-wave analogue synths and static drenched electronic euphoria’ which Fighting Boredom think sums it up pretty well. We have been listening, read what we thought below.

This is what would happen if a bunch of like minded indie heads managed to build a time machine and go back in time to the sixties, get into Phil Spector’s studio and steal all of his notes on making his trademark wall of sound then skip forwards and got hold of a bunch of analogue synths, take the time to read the instructions and plugged everything into some lucky sound desk and  turned it all on. They even managed to get Brix Smith on the record, which is always a fantastic touch. It’s an indie pop, psychedelic drone filled analogue treat.

Each song starts quietly and delicately then builds into a massive melody filled track of indie goodness, but each sounding vitally different to each other. They all have the same vital ingredients but manage to mix them up into a different kind of souffle of sound with every segment of the album.

Some of it is more obvious in it’s indieness, ‘Mutator’ is easily the most straightforward ‘let’s dance at the local indie disco’ track, but then for every ‘Mutator’ you get the equivalent spiraling psychedelic drone of ‘Black Rainbow Sound’ or the sheer proggy madness of ‘(Like) Rainbow Juice.’

There are drones, keyboards, guitars, beats and much more. There are songs that steal in your ears and push your eyeballs out. It’s great, Fighting Boredom recommend that you have a listen.