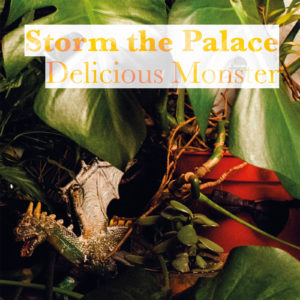 Edinburgh based Storm the Palace describe themselves as ‘a band that takes the classic indie-folk of Kirsty McColl or The Decemberists, that veers between moments of Sleater Kinney-esque rage and Lynchian atmosphere, then adds the humour, geekiness and muso-complexity of They Might Be Giants. Now imagine that band performing profane songs about puppies and you have Storm the Palace.’ They have just released their new album, Fighting Boredom have been listening, read what we thought below.

Storm the Palace make pop music, and they do so very very well. They have an innate quirkiness and humour that leads the first track on this record to be an ode to a cheese plant, a cheese plant called Clive. Who is also the Delicous Monster of the record’s title. It’s a wonderful thing and there are not nearly enough songs that are about cheese plants. They also sing about seagulls and goldfish with songs full of regret and story telling.
They also touch on sea shanties and the fact that men are, essentially a pain in the arse and not worth all the fuss. I’m not going into every song but I could write reams about this release. The tiny sound of regret and loss and the tales of mortality. It’s gloriously funny in paces and unbearably sad in others, but it’s beautiful music all the way through.
The last song however does deserve a mention, any song that talks about a break up with such candid emotional power deserves to be a huge hit, although I doubt that ‘Give me my fucking puppy you bastard’ will make it onto the radio, and that is a huge shame. Any song about crying in the toilet at work with a chorus of sheer unadulterated fury deserves all the attention it can possibly get.
This is closest in spirit to the likes of Kirsty MacColl, it’s very British in it’s sound and will appeal to anyone that likes a story and a song. Well worth a listen.
–