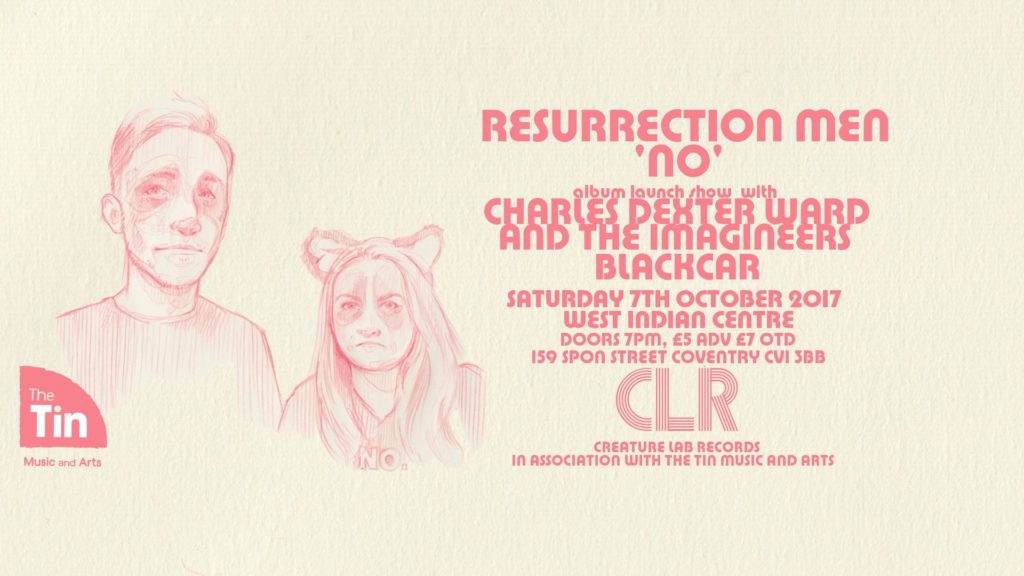 Fighting Boredom reviewed the new album by Resurrection Men last week and were blown away by it, the album launch show looked pretty much unmissable and then we realised that the support was the time travelling psychedelic onslaught of Charles Dexter Ward and the Imagineers. A perfect match and we were there to be blown away one more time.

The West Indian Centre in Coventry feels big, the hall is bare and there are just white lights on stage. Around the edge are tables piled high with glasses, empty bottles and cans. The bar is open for around half an hour at a time and then shut again, it’s a makeshift DIY feel which fits the two bands that we see down to the ground. 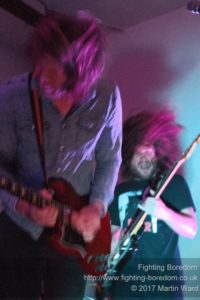 Charles Dexter Ward and the Imagineers arrive from the Jurassic era in their worn out, mud splattered time machine and wander onstage. The light casts their shadows on the side wall of the stage as tall, supernatural creatures and as you register that, the feedback starts. They let the whine and screech get to the point where you are practically begging for the music to start and they slam into the demented blues garage boogie that they seemingly summon up at will. The sound and rhythm is madness itself and when the vocal kicks in you know that this is a sound dredged deep from the bowels of the Earth infused with evil and confusion. The first song blows us away and it then just keeps escalating.

They hit us with an extended psychedelic blues punk jam that slides messily into a full on garage fuzz drenched boogie and on top of it all the voice of a demon gargling gravel and petrol sings as if there’s no tomorrow. The Imagineers have locked in so tight that it’s insane, they know instinctively where the others are heading and just move with them, the hall seems to be floating in time with the band, this could be the house band for Apocalypse Now, the smooth hippy licks slow the pace down and the vocal drips blood and dust, you know it’s going to get gone soon and you know it’s going to mash your head again but it’s the waiting that breaks you. Then, as you already knew, the band smash into the dirtiest noise since the stooges took all the drugs in the world. The vocalist is bent double as the groove switches from slow to fast without mercy and they’re gone.
It’s as good as it gets and we expect nothing less than that from Charles Dexter Ward and the Imagineers, a massive psychedelic addled punk rock blues explosion that tears you apart and makes everything okay in the world for an hour or so. 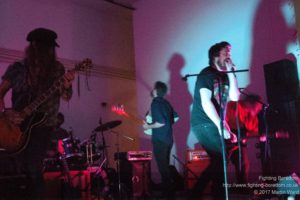 Resurrection Men have an intro tape which the chap in the middle of the stage stands ramrod straight and sings along to. The band spread across the stage and as the white lights send their shadows climbing the walls alongside them the room gets even bigger and more daunting. They start with Threes off No and it’s just as brooding and full of barely restrained anger as on wax. You want them to explode out and over the crowd but the only release is the jarring stabs of guitar. They turn a corner to be faster and harder and the vocal is loud and clear. The hippy dippy interlude lets you breath briefly before the doom guitars wipe it away and the groove turns low and frightening. They go into jazzy funk, slip into an indie mindset and then go to a powerful glam rock jam, which is just utterly off the wall.
It keeps circling around and up and down. There’s a stone cold old school punk rock riff then prog mind bending at its best, then garage sixties fuzziness. I can’t keep up and just stop thinking. You don’t think about it, you just move to the music and let it take you off.
Everything is different except that it’s all massive, it’s huge and this band are blasting the hell out of whatever they are playing. The lead vocalist holds your focus, when he’s not singing he’s doing something to grab you, just give in, they are too much.
They seem to not give a toss about anything except their music and they don’t need to, they are ace. We will be back.
–
Charles Dexter Ward and the Imagineers 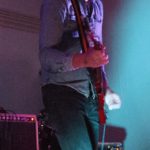 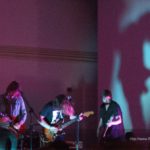 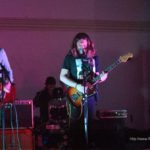 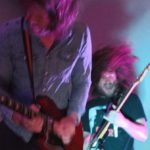 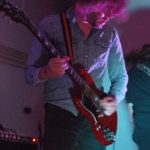 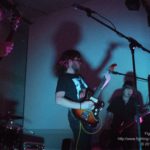 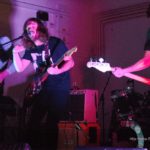 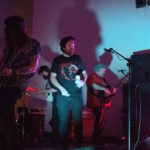 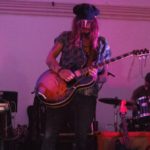 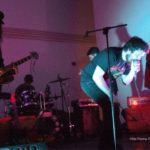 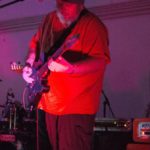 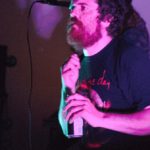 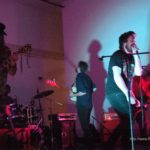 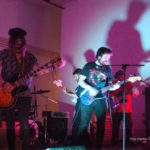 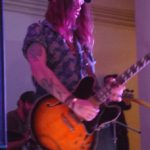 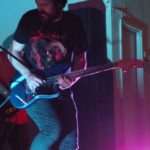 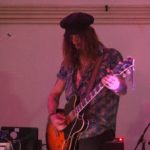 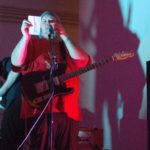 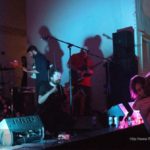 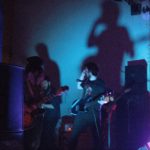 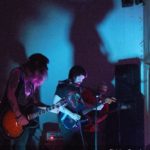 Resurrection Men are on Facebook. You can buy the new album from Bandcamp.
Charles Dexter Ward and the Imagineers are on Facebook.
All pictures by Martin Ward, all words by Adrian Bloxham