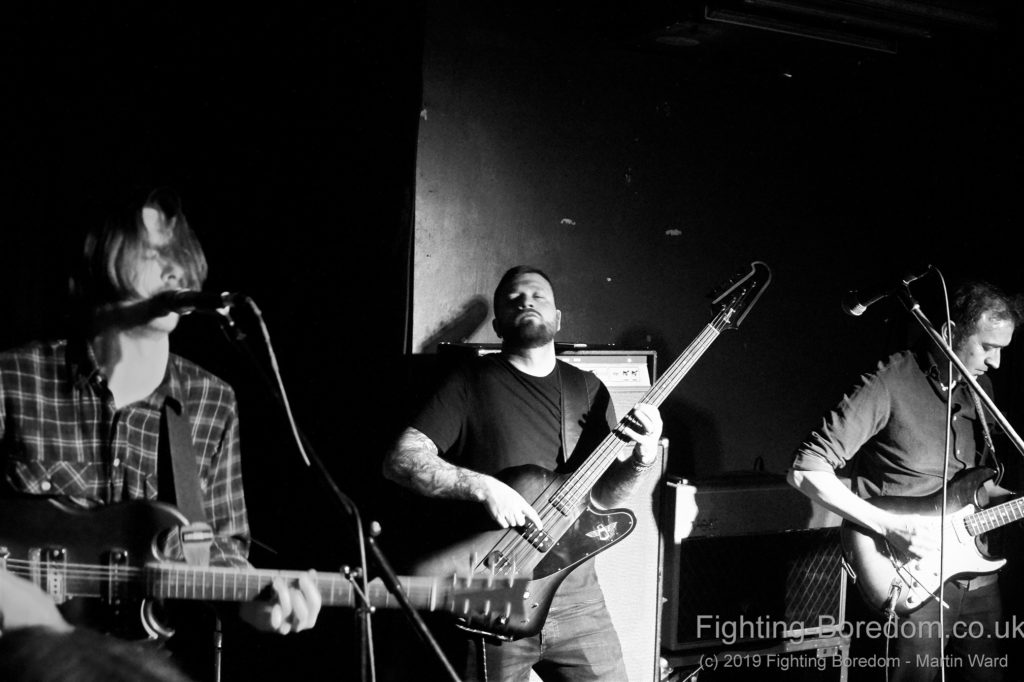 The Tin – Music and Arts – Coventry

Imperial Wax are a four-piece comprising frontman Sam Curran and Keiron Melling, Dave Spurr and Pete Greenway – three 11 year veterans in the longest serving and last line up of The Fall. This is their first Midlands show. Add to that  Gunther Prague who have just recorded their latest album in Chicago with Steve Albini and say that you should ‘think of Shellac vs Cardiacs or Minutemen playing metal’ and Storm the Palace who describe themselves as ‘Radge folk pop from Edinburgh’ makes for an evening that Fighting Boredom were not going to miss.

The snapper’s suffering from some sort of bug and sipping Kraken rum, I’m worried about my knee collapsing but we’re still here. The place is quite empty when we arrive in time for the first band. Storm The Palace have drums, a flying V guitar, bass, hand accordion and electric violin. There are three men on drums, accordion and violin and two women on guitar and bass, the tiny stage in front of us is full. As they warm up they sound like a group of free jazz cats.

They start with the accordion and violin, high and piercing, they are joined by the guitars and bass and then just drops to accordion and a soft, sweet female vocal. Both the guitarist and bassist are harmonising and the music turns to way out there Prog. The vocals and music get harder, there are blasts of noise alongside the drums. It feels like old folk music, but it’s interspersed with a loud and insane feeling Prog vibe. The whole band are singing and then the crushing noise. 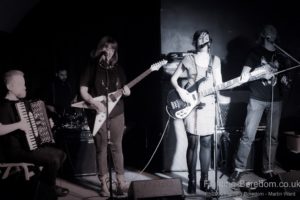 Bouncy song, loud with lots of noise, very indie feeling, the bass feels a little like Elastica and their peers. The accordion and violin are playing but are buried in the song. It’s a big dramatic sound with lot’s of switches of direction and the story telling lyric. ‘Next is our Dinosaur song as every band needs to become successful’ The violin and cymbals give the start of the song a quirky, off centre feel, it’s a sing-a-long-folky-punky groove, the voices tell a story and the music gives it strength.‘The next one’s about a cheese plant’ There’s a throbbing synth sound and then strumming guitar and quiet vocal. Builds to big music and vocals and judging from the bassist’s little smile I’m guessing that there’s a touch of humour to this song. I’m also guessing that it didn’t end well for the cheese plant.
‘No goldfishes were hurt in the making of this song’ Stop and start music, almost a tango and brilliantly dramatic. The introductions get better as they carry on playing ‘This song is all about trains, robots, trains and death’ It starts quietly with vocals and accordion  but it grows to a quirky, sound and then grows again to a loud, slow, epic noise that fills you up, like a journey progressing on and on and on. Their last song is introduced as ‘One to teach your kids’ It quickly transpires that this isn’t one to teach the kids at all, it’s tiny guitar notes and a high clear vocal that blasts into a noisy chorus of ‘Give Me back My Fucking Puppy You Bastard’ then switches back to tiny noises that feel more disturbing after the loudness, then back to the nasty angry chorus. Brilliant.
Gunther Prague come onstage and stand,  they have guitars, spiky, nasty, loud as hell and not giving you anything to focus on. They are angry, jerky and full on. The track slows and switches and it’s stunning in every way. It’s a hardcore attack, it’s fast and pumping through me, the force is immense. The undercurrent of rage that powers ‘Tommy Cancer’ is among the nastiest post rock I’ve heard. It’s the distilled essence of what we used to call alternative rock stripped to it’s raw, rusted and dented core, there’s a 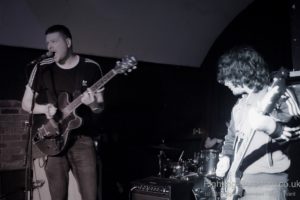 total feeling of fuck the frills, this is all you need and it’s brilliant. ‘Feeling I’m Adopted’ is righteous anger and and slabs of angular noise.  You can tell they have just recorded an album with Steve Albini.
‘This is a song about erm… rampaging egos’ Which sounds like being in a fist fight, fast and disorienting with hard punches, no time to breath or think. The vocal’s frantic and the music is as hard as a brick wall, no fat, no waste, just muscle. The only other band I have seen that are this pared down and wasteless was the Rollins Band.
‘These are newer songs from the 2019 album we haven’t recorded yet’ and again they are straight into slabs of noise, repetitive and relentless, crashing into us. It’s exhausting and exhilarating. The bass is all over the place, the vocals rise and fall and the drums are verging on jazz. The drums turn machine gun fast and the music starts to lurch forward into a powerful nasty pileup of a song with a hardcore style vocal. They stop, say thank you and are gone. Gunther Prague are stunning, I can’t think of another word for it.
The place is now filling up fast. People are getting as close to the stage as they possibly can. This is serious stuff. Imperial Wax’s first Midlands show. Imperial Wax were the last and longest standing lineup of The Fall before Mark E Smith passed. The Fall have a legion of very loyal fans. Everything points to a full house and a very big night. Especially bearing in mind that at the time of this show they have one track available to listen to. 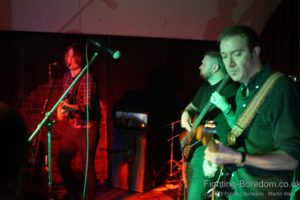 They start with quiet strumming, which moves into a full on wall of rock’n’roll punk garage noise. Loud, low strung and hard with an echoing vocal. They are steady and rock solid, the vocals are spot on to the music.
‘This is the second song’ the music is off centre, lurching and staggering forwards, still hard and loose. The volume has increased to the point that distortion is taking over, my ear has gone. The drums slow down and the guitars pile up over the top, it’s a measured beat as the song goes into nasty loud dragnet sounding rock’n’roll. They have the feel of those primitive underground punk bands from the sixties, the ones with the slinkiness that makes you move your hips and the music to make you want to howl along.
They play a flowing sound with a hard pointy edge, it’s a step on from indie and rock and everything else, it jerks and swerves, the vocal is loud but everything is now distorted, the last time I saw something this loud in a tiny room was Bob Mould.  I can’t really describe where the music groove is coming from or heading to, it’s just Imperial Wax and it’s excellent. I’m getting pissed off that I’m sitting down but so it goes. They slam into a swampy rockabilly crawl and the genius feel of the band comes together, they are so tight. The band as as cool as fuck, and I’m gone again, the event getting under my skin as I grin at the stage.
‘This is the single’  hard, steady garage punk, stuttering, off the wall 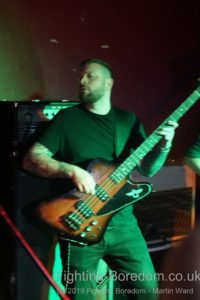 and excellent, what a band, the sound is very British and very cool. I’m attempting to dance on my healing knee. They are punching their weight, people are getting emotional as the power rises and the slinky rock’n’roll blasts out. Distorted and unclear, the music is so loud it hurts, I love it.
The band that keeps coming to mind as they play is the Stooges in their sixties and seventies shambolic glory. Raw rock’n’roll and glorious focus. A funky jam goes faster and faster with drums, bass and feedback. It feels like the track is going to explode but it holds back, it’s broken apart and then pieced back together again as it goes on and on. Everyone is dancing and the menacing dark boogie just goes on.
‘Can’t be arsed’, it’s now ferocious punk, everything is fast and thrashing. A slow bit and then we’re off again, a very Slaughter and the Dogs groove. Then a psychedelic swamp crawl, slow tripped out and fuzzed to hell.
‘This is our last song’ Feedback then drums. High guitars, unrelenting drums and bass and the crowd have lost it. It’s The Fall, and it’s just brilliant. There’s minimal vocal but absolute total respect. They then just don’t come offstage and they launch into another Fall song, this one sung by the bassist. The crowd are all over the place now, the music is a distorted mess and I’m pretty sure the bassists mic is cutting out. But none of that matters. All that matters is that Imperial Wax played an absolute blinder of a gig. Can’t wait for the album. As we walk away I can’t hear anything. 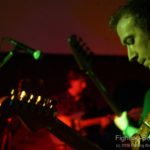 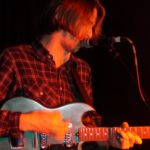 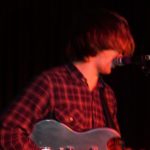 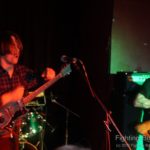 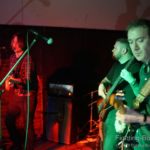 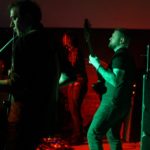 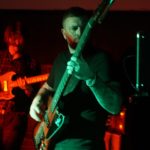 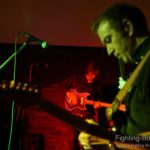 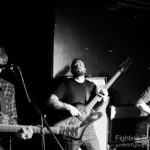 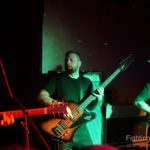 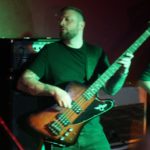 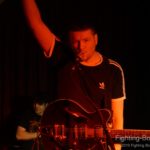 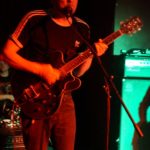 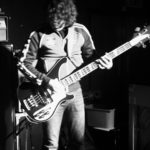 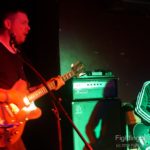 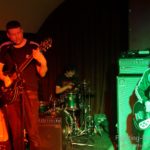 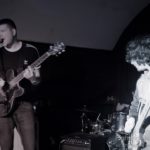 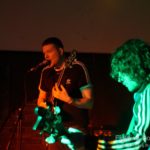 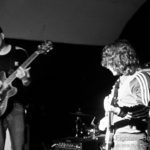 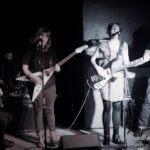 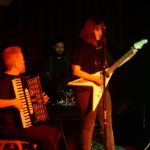 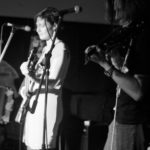 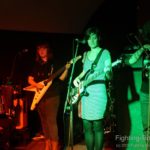 Gunther Prague are on Facebook and have a Bandcamp page.