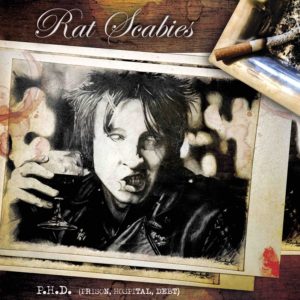 Ex- Damned Drummer Rat Scabies is about to release his first solo album. “I have written music ever since I threw together ‘Stab Your Back’ and have been recording ideas right up until the very week that PHD was due to be mastered. This is the music I created over a period of years – starting then and ending now,” says Rat. Fighting Boredom’s Adrian Bloxham liked the Damned a lot and so approached this with enthusiasm. He was not disappointed, read what he thought below.

A big bastard blues riff starts the album, I was expecting that drum sound, you know the one, the beat that ignited the genius of Punk then pushed the boundaries of psychedelia, goth and rock’n’roll further and further out. Then he hits the drums and it’s there, a chaotic mass of noise propelling the song into overdrive and not letting up until the end.

Rat plays everything bar the bass, he has cut the guitar, cigar box guitar, keyboards and of course drums. He has help from Jesse Budd of Flipron with lyrics and vocals, and Nick Oblivion on bass guitar. This isn’t a vanity project, this is a full on smorgasbord of music. Rat has said that during all the waiting between drumming in the studio he got interested in other instruments and how things worked and that led to this collection. It was suggested that he release a compilation of the stuff he’s had out over the years but he couldn’t see the point. So he put together this for us.

It starts with snotty punk and goes into psychedelic freak outs, big band danceathons, massive overblown musical theatre, blues boogies, gothic organs and even a drum less spaghetti western slide guitar treat. It’s all over the place, but then if you think about it, he was in one of the most versatile of the class of ’76 for many years and, if you take into account the Grail Hunting and Cigar Box guitar constructions, has led a rich and varied life. You just need to look at the album title to see that.. ‘Prison, Hospital, Debt’.

You can’t help moving, the cover of the fantastic Louis Prima’s ‘Sing Sing Sing’ made me dance across the room when I first heard it. The massive orchestral might of Rat’s Opus had me air conducting. It’s infectiously great. The majority of tracks have no vocals, or just samples of UFO hunting or experiences while imbibing substances. This makes the music stronger. More entrancing and consuming.
I loved The Damned and quite rightly have missed Rat’s presence behind the kit when I chanced to see them recently, but they have chosen their path and Rat is on his own. I’m happy to walk it with him.
–