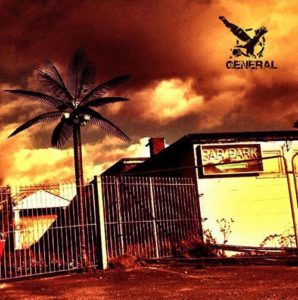 General are that band that your mate plays you and you can’t work them out. They could be seventies longhairs basking in the glory of Rock’s golden days, slamming out huge riffs and leaving a trail of destruction behind them. Or they could be plaid shirt clad stoners from Nowheresville USA signed to Sub Pop and blasting out a message of angst, distortion and bleakness. Or they could be a bunch of sixties degenerates signed to Electra having stolen Ron Asheton off the Stooges with the promise of stronger drugs. They destroy Rock and build it back up stronger.

The debut album promised much and delivered more, to follow it they have had to crank it all up a gear which means even heavier riffs, more mind bending guitar over the slabs of noise with a bass and drum combination that lays down a stone cold cool groove underneath. Any of the elements on this album on their own would make General just another Rock band, but the combination is electric and smashes it.

Songs? You want to know about songs? Well imagine Tony Iommi locked in a room with the aforementioned Ron Asheton, an echo of soulful spaced out bass and the heaviest drum sound this side of Bonzo, imagine telling them to just play, and then letting the spine-chilling, emotive vocal loose over the top of it all and you have General. They let the music have space, it’s huge but it breathes, they let it grow into itself and circle around. If you’ve seen them live you’ll know just what I’m talking about, if not, just listen, you’ll be there next time.

The music seems too big for the record, it’s not going to shrink away either, you’re not going to be bored of this in a month or so. Heavy, massive and slow are the words that echo around your head as you stand and sway to the songs. They’re not afraid of quiet either, the acoustic opening of Aluminium Woman, even though it is swallowed up by the mass of guitars and drums adds to the track. The vocal is also occasionally isolated, especially at the start of The Date, with devastating effect.

It is the best Rock album I have heard so far this year, and I’m unsure it’ll be beaten.