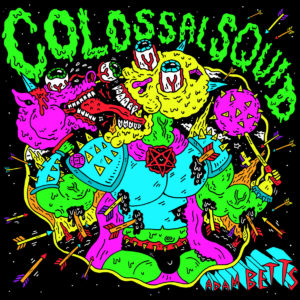 Adam Betts released his album Colossal Squid back in November, it comes after years of ‘exploring the boundaries between electronic and live music, and celebrating the flaws thrown up when one tries to replicate the other.’ Recorded in one live session, Fighting Boredom highly recommends it.

Adam Betts is best known for drumming with Three Trapped Tigers and Squarepusher, to be honest that there is a reasonable excuse for anyone to check out this album. Even without me telling you how good it is.
It was made in one sitting. played on instruments that Adam created on Ableton that he can trigger while drumming or SPD-SX. That made it possible to play the album live and take the sounds in whatever directions they led him.
It follows then that the record is an improvised collage of sounds, he flits from electro beats to drums without a pause, exploring each sound until he wants to put something else over the top for you to focus on, squelchy synths? Jazz drum rolls, easy, just slot them in there. The organic mass of sound grows and loses shape to be pulled back into play as the music rolls on.
The sound is very accessible, very easy to listen to, even the mad rolling drum sections lead into quieter more formal music so they don’t take you away for long. In the end you just want to hear where this music will go next, electronically manipulated vocal yelps? Huge classic synth chords? It’s got these and more. As you sit and it envelops you the feeling grows that you just want to listen to this in it’s entirety and not be interrupted by banal life.
Then, when it’s done, it’s ready for you to listen again and focus on something else hidden beneath it’s surface.
It’s a record to explore and to discover, excellent and absorbing.