We posted the first half of Fighting Boredom’s review of 2017, the photographer’s view, yesterday. Today it’s Adrian Bloxham’s turn, the writer. You get exactly the same as the last page with his top ten albums and comments and then top ten gigs and recomendations. There is some overlap but we don’t feel the same about everything which is what makes Fighting Boredom what it is.

Again, all of the albums here have clips of music with them and all of them are either on Spotify or Bandcamp to listen to, so dive in!

A terrifying, suffocating and a totally beautiful creation.

8 – Japandroids – Near To The Wild Heart Of Life 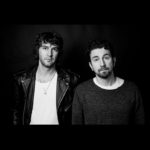 Stories with massive chorus’s, great big guitars and drums, the occasional keyboard and songs to die for.

The rhythm of the robotic dance of celebration after the last human has perished and gone into the dark cold void.

Primordial distorted Rock’n’Roll from the black hearts of demons dressed in sharp suits and superhero masks.

What you would expect from Godflesh but stripped back and even more focused than usual.

This is where Fighting Boredom agree, both of us chose this as our number one album of the year. You start listening to it and two hours later it’s still on, mesmerising and brilliant. As Martin said, just go and buy it.

Other Great Stuff from 2017

All words by Adrian Bloxham, live pictures by Martin Ward.