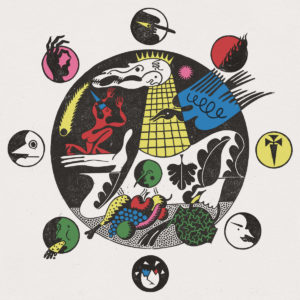 Now this is what I want. Huge guitars and bass that bludgeon you as you sink slowly into the drums and that vocal. It’s the closest thing to absolutely rock I’ve found this year, it’s got space, it’s got moments of calm if not exactly peace, breathing space maybe, and it’s got the biggest music you can wish for. Put it like this, if, like me, you were shouting along to Sabbaff on the radio this morning as your speakers tried to provide the volume you needed.. then this is for you. The sound of youth taking the music they love and hammering it into submission. It’s massive, brutal and just perfect.

The album is an exercise in barely restrained aggression, the quiet moments and the holding back make the blaze of true rock come into focus sharp and hard. The songs are long but never excessive. There’s not an ounce of fat here and not a moment wasted. The tracks are perfectly formed and you get the impression that their practice sessions go on for days. There’s perfectionist vibe, no sloppy laid back stuff here. This comes from the Rollins school of focus, narrowed to a point of white hot light.

It’s not a cold album, it’s not cement and glass, it’s more the wide open vista of a mountainside in the driving rain, the feeling of standing waist high in a river as it tries to carry you away. It’s a rock masterpiece, and I don’t use that word lightly. Pigs Pigs Pigs Pigs Pigs Pigs Pigs have truly excelled themselves
–